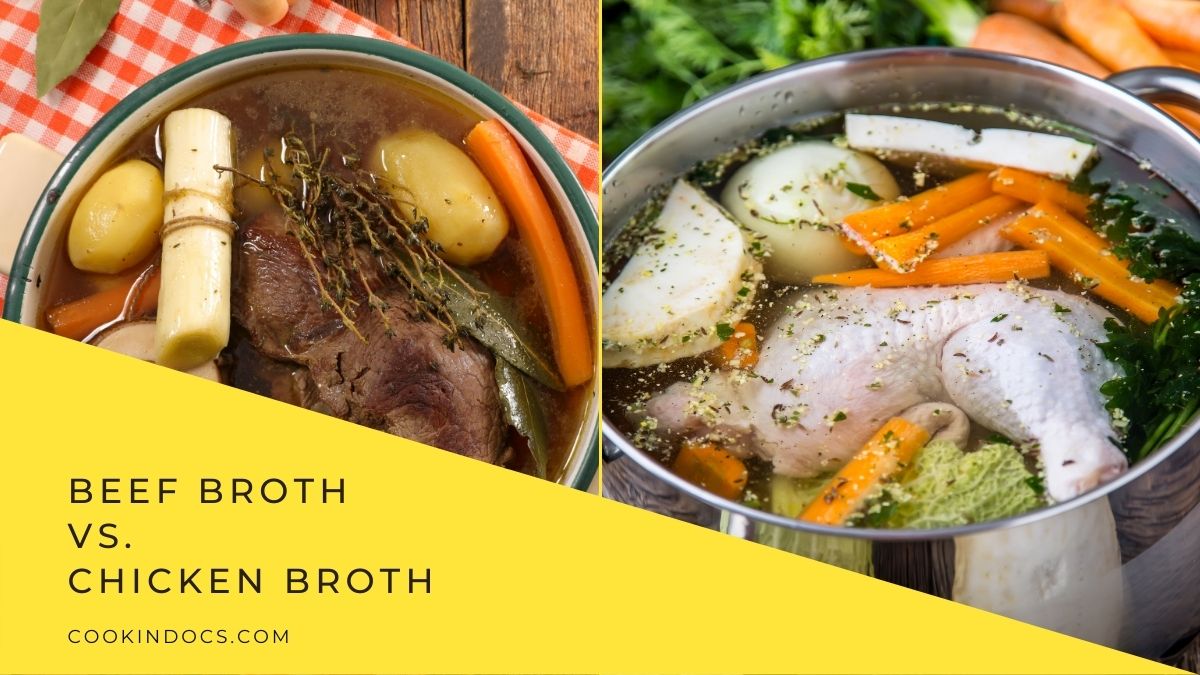 Beef broth and chicken broth are two popular options when it comes to making soups or sauces.

But what is the difference between these two kinds of broth and which one should you choose?

What is beef broth?

Beef broth is a liquid made by simmering beef bones, and other beef parts (chuck, shin) in water for several hours.

It can be seasoned with herbs or vegetables such as carrots, celery, onion, garlic cloves.

The resulting broth is rich in flavor and has a gelatin-like consistency from the bones and connective tissue of the meat.

Beef broth has long been used as an ingredient in soups, stews, and to make gravy.

It is also popularly served over rice or noodles for a light meal on its own.

In recent years, it has become part of a trendy health trend that involves drinking it like tea instead of coffee or black tea because of its high levels of collagen protein which may offer benefits to your joints and skin health.

A piping hot bowl of beef broth can also help you cope with common colds.

What is chicken broth?

Chicken broth is made in the same way as beef broth, but instead of beef bones and meat, the recipe calls for chicken bones and chicken meat.

These ingredients are simmered for hours until all the flavors and nutrients from chicken bones and meat penetrate into the liquid.

Chicken broth is considered to be a healthier alternative for beef broth because in general, poultry contains less fat and cholesterol than red meat like beef.

Chicken broth does not only taste good but also rich in nutrients that your body needs for an all around healthy diet.

Consuming chicken broth can reduce inflammation throughout the body and help with digestion issues such as irritable bowel syndrome or Crohn’s disease.

Chicken broth can be easily made from a few ingredients at home, however, it might take time.

Due to this fact, there are many manufacturers that offer canned chicken broth that is typically sold in any supermarket.

Store-bought chicken broth is ready to be served after minutes.

It tastes amazing like the homemade version, however, is usually high in sodium.

The question of whether chicken or beef broth is “better” is a complex one.

After all, the answer depends on the context in which you’re using the broth.

If you’re using the broth to cook rice, for example, then chicken broth will give your rice a more subtle flavor and texture.

If you want something that tastes more like beef, then beef broth will be better suited to this purpose.

If you want to add some extra flavor to a soup or stew, however, then beef broth will be better suited than chicken.

This is because beef has a stronger flavor than chicken and will stand out more prominently in your food.

Can I use beef stock instead of chicken stock?

You can absolutely use beef stock in place of chicken stock.

Beef stock has a more intense flavor than chicken stock, but it’s a very versatile ingredient that can be used in many different recipes.

You’ll want to use the same amount of beef stock as the recipe calls for chicken stock, though you may want to reduce the amount of salt in your dish if you’re using a lot in the beef stock itself.

In general, when substituting one type of liquid for another in a recipe, you’ll want to keep track of any changes you make in order to make sure your final product is still safe and delicious!

What are the differences between beef broth vs chicken broth?

Chicken broth and beef broth are both great for soups, stews, or sauces.

However, they differ in many ways that can make one more suitable for a specific dish than the other.

The table below will give you a closer look at how beef broth and chicken broth differ from each other:

What are the similarities between beef broth vs chicken broth?

Besides some key differences between these two classic broths, beef broth and chicken broth do share some similarities, as mentioned below:

1. Chicken broth and beef broth are both high in calcium and magnesium

Since being made by simmering bones for hours, both kinds of broth are rich in calcium and magnesium.

These products will be very helpful in supporting your bones and joint’s health.

2. Chicken broth and beef broth can be used interchangeably in some cases

Chicken broth and beef broth are meant to be used in soup, stew, and gravy recipes.

Although chicken broth seems to work better in a dish that calls for poultry meat and beef broth is suitable for a red meat dish, they can be used interchangeably in some cases.

For example, you can make sauces or seafood soups by using either chicken broth or beef broth.

One thing to keep in mind is canned chicken broth and beef broth are pretty high in sodium.

Therefore, when shopping for store-bought broth, you should look for a low-sodium product.

Also, it is best to limit your portion of canned chicken broth and beef broth, and not consume the processed broth frequently for better health.

There are many types of broth that you can use to make soups and sauces.

But beef jointbroth and chicken broth stand out and are most commonly used by consumers from all over the world.

Determining which one is better will really depend on what kind of flavor profile you want in your dish.

If a rich, deep taste with lots of umami flavors sounds good to you, then beef would be the best choice for this recipe.

On the other hand, if a lighter savory flavor suits your needs, go ahead and pick up some organic chicken broth from a grocery store instead.