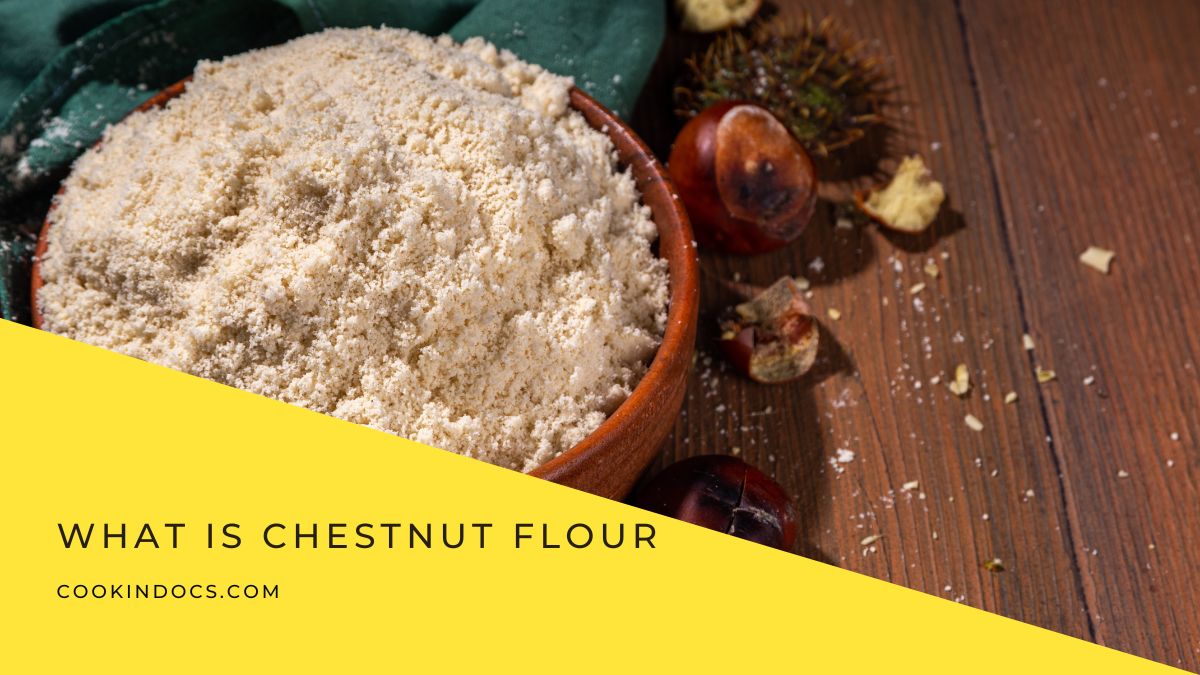 Chestnut flour is a type of flour that’s made from ground chestnuts.

It has a creamy texture, but can be used in a variety of different ways.

We’ll explain more about it below!

What is chestnut flour made from?

Chestnut flour is made from the dried and ground fruit of the chestnut tree.

It can be used as a gluten-free alternative to wheat flour, or it can be added to foods for extra fiber.

Chestnuts are naturally high in protein and fiber, making them ideal for baking with since they help to keep you feeling full longer than other flours would.

Chestnut flour is also rich in vitamins and minerals, including iron and potassium.

It’s important to note that chestnut flour does have a very strong flavor, which can be overpowering if used incorrectly.

When baking with chestnut flour, it’s best to combine it with other flours or add sweeteners like honey or maple syrup to help balance out the taste.

Chestnut flour can be used in a variety of dishes, including breads and pastries.

What are the carbohydrates in chestnut flour? Carbohydrates make up about 5–7% of the total weight of dried chestnuts, with a significant portion being fiber (11%).

It has a low glycemic index of 35.

Chestnut flour is high in fiber and protein, making it a great addition to diets for weight loss and overall health.

It also contains a good amount of iron, magnesium and potassium.

This makes it a versatile baking ingredient for gluten-free recipes and other baked goods.

For savory dishes, chestnut flour can be used in place of regular flour or made into roux or gravy.

You can also dust with it on salads, chicken and meat dishes like veal scallopini (in place of bread crumbs).

Chestnut flour is gluten-free, making it a popular alternative for those who are sensitive to wheat.

It contains antioxidants and vitamins that are good for your skin and eyesight.

Chestnut flour can be used in a variety of ways, but it’s most popular for baking.

Chestnut flour is often added to cakes, cookies, and breads.

Another common use of chestnut flour is as a substitute for wheat flour when making gluten-free products.

You can also use chestnut flour in gluten-containing recipes if you want to reduce the amount of carbohydrates or grains that are typically found in traditional foods like pizza crusts!

-Chestnut flour is high in fiber and protein, which makes it a great choice for people who are trying to lose weight or manage their blood sugar levels.

-Chestnut flour has a naturally sweet flavor that makes it perfect for desserts! You can use chestnut flour in place of regular wheat flour when baking cakes, cookies, pies and other treats.

What is italian chestnut flour called?

Farina di castagne is a popular ingredient in Italian cuisine, and it can be used to make desserts, breads and pastries.

Farina di castagne can be used as a substitute for wheat flour because it has a similar nutritional profile but with fewer carbohydrates and more fiber than wheat flour.

Chestnut flour contains a significant amount of carbohydrates, but it also has a high fiber content.

Chestnut flour is gluten-free, so it can be used to make both bread and pasta.

If you choose to use chestnut flour as a substitute for wheat flour in your baking, be aware that the resulting product will not have quite the same consistency or flavor as its gluten-containing counterpart.

If you’re looking for more of an authentic experience, try substituting some chestnut flour into traditional recipes (like focaccia) rather than making something entirely new.

If you’re making something like bread or pizza dough, you can substitute about 20% chestnut flour for wheat flour.

Where to find chestnut flour?

Chestnut flour is available in many countries and can be purchased online.

In the United States, it’s sold by companies such as Bob’s Red Mill and King Arthur Flour.

You may also find it at specialty markets or online retailers like Amazon.

In Europe, you can buy chestnut flour at baking supply stores or online retailers like Amazon.

In Australia, chestnut flour can be purchased from specialty bakeries and food shops or ordered from Australia Post if you live outside of metropolitan areas like Sydney and Melbourne.

How to make homemade chestnut flour

To make your own chestnut flour, you need to first peel the chestnuts.

(The inner skin should come off easily.)

Next, roast the peeled chestnuts at 350 degrees Fahrenheit for about 20 minutes until they turn dark brown and start to split apart.

Once cool enough to handle, use a sharp knife to split open each nut, removing its inner skin and sweet fleshy center as well.

Finally, grind them into flour using your food processor or blender!

If you don’t have chestnut flour on hand, you can substitute it in many recipes with:

Chestnut flour is a versatile ingredient that can be used to add some pizzazz to your everyday meals.

It’s also great for baking and making breads, which makes it a great gluten-free alternative for those who want something more than just plain ol’ wheat flour!